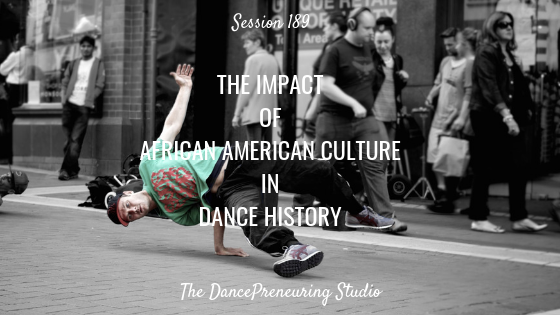 The truest expression of a people is in its dance and in its music. Bodies never lie.

There are times when the simple dignity of movement can fulfill the function of a volume of words.

Backslide, Apple Jack, Lockin, Electric Boogaloo, Urban Cha cha, and hip hop–what do you picture when you hear these words? If you know your dance history, these are dances and dance traditions from African American Culture. You know that saying, you don’t know what you don’t know? Well it turns out, not surprisingly that there was a lot I didn’t know about these dance forms and traditions until I got to hear an engaging and entertaining discussion with dancer and dance historian E. Moncell Durden and curator Vida L. Brown at the California African American Museum in Los Angeles. From video clips, to demonstrations, to dialogue, I loved this experience and I’m going to share a number of things that stood out to me. This is in no particular order:

Links from this session:

Get my FREE Audio Resource

Would you review The DancePreneuring Studio?

I would be extremely appreciative if you would subscribe and leave your feedback on Apple Podcasts or Stitcher Radio. It really helps if you do it through the native Apple Podcast App on your smart device. Thanks so much!

About the author, Annett

Annett Bone is the creator and host of The DancePreneuring Studio where she guides her listeners on a journey of transformation inspired by dance, life, and business. The podcast is a reflection of her personal adventure overcoming her fears and returning to her passion for dance after a 20+ year hiatus, the lessons that she has learned along the way, and proving that it’s never too late to be great.